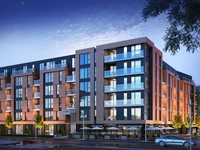 Carter sur le Parc is a condo rental project located just across from Jarry Park in Montreal. The building boasts wide fenestration onto a breathtaking view of the park facing west, while the private garden of Carter is seen facing east. One to three-bedroom units are offered in addition to six luxurious penthouses.

The condo development is located in the inimitable district of Little Italy. This neighborhood, once the jewel of proud Italian immigrants, has revealed itself to all Montrealers and is now the most popular neighborhoods in the metropolitan area. The neighborhood life found there has an undeniable attraction. The many shops and attractions make it a great place to live. The must-see Marché Jean-Talon, the Milano Market, Jarry Park, and the IGA Stadium for tennis fans, as well as the many local trattoria and pizzerias that lure the residents of the area.

The access to the neighborhood is particularly simple since the Jean-Talon metro station and the train intersect there. The neighborhood is woven of several bike paths, while a wide network of shops is within walking distance.

X
Our broker service can help you find a home that's right for you.

Real estate projects that do not subscribe to our service have their requests sent to our real estate brokers partners. Our brokers help our customers buy or sell their property in the most efficient way possible. Finally, remember that the broker is paid by the seller of the home.
Fill in the form

Posts about this project