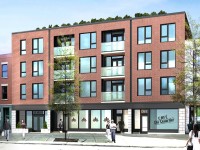 Le Milieu is a new condominium developement in the Mile-End district of Montreal. The site is of high significance within Montreal's artistic scene as it was the original site of Theatre LE VERDI followed by Theatre LE NEW YORKER and later Theatre LE MILIEU; one of the first repertoire movie theatres in Canada and the first in the city. In 1985, it launched "Les Quinze jours du Milieu", a decidedly bilingual avant-guard arts festival that made it famous and hinted to the artistic future of the neighbourhood.

PROJECT
In 2013, Le MIlieu Condos, brings forth a development inspired by this longstanding Mile End dedication to culture, community, and redefining the arts.

In addition, the neighborhood and its ever-growing social outlets for every palate and budget will illuminate every artist within!

READY TO MOVE IN

For more information get in touch with Beatrice Beaudinet

Looking for a home in the area? Check out our list of nearby projects

Location of this project